The 2018 Girls Inc. of Northern Alberta Operation SMART Program was amazing as always! This year we had 21 girls that participated over 8 weeks from September 8th to November 3rd. The girls were able to learn about so many STEM disciplines, from wildlife biology with Bear Scare to scavenger hunts at the Oil Sands Discovery Centre to Scratch programming with Code Mobile!

In the first week of the program the girls learned about the concepts of engineering design and built newspaper towers. They then got to work in teams and use different materials for the Egg Drop Challenge! They had to drop their eggs from 10 ft high and see if they could prevent it from breaking! 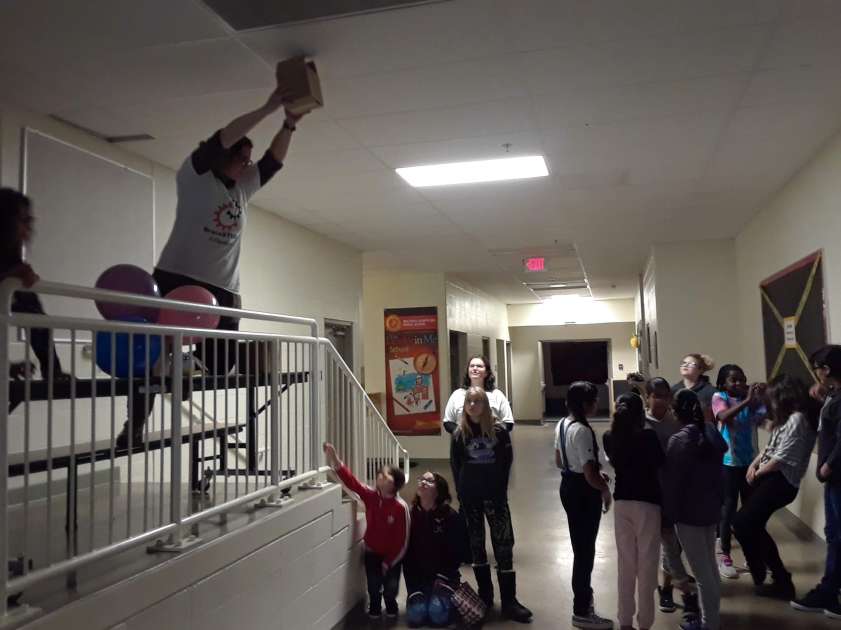 In Week 2, we had Sithara Fernando from Bear Scare speak to the girls about wildlife biology and the classification process of animals. They learned about how we classify animals based on similar properties and the girls had their own activity to classify their shoes! This lead into an activity on biomimicry, the process engineers use to design useful products inspired by nature. The girls had to present their own designs, from bat-inspired echolocation devices, to pelican inspired expanding storage devices to reptile inspired color change outfits, the girls came up with some very innovative products! Finally they learned some environmental engineering concepts for cleaning water and designed their own water filters. 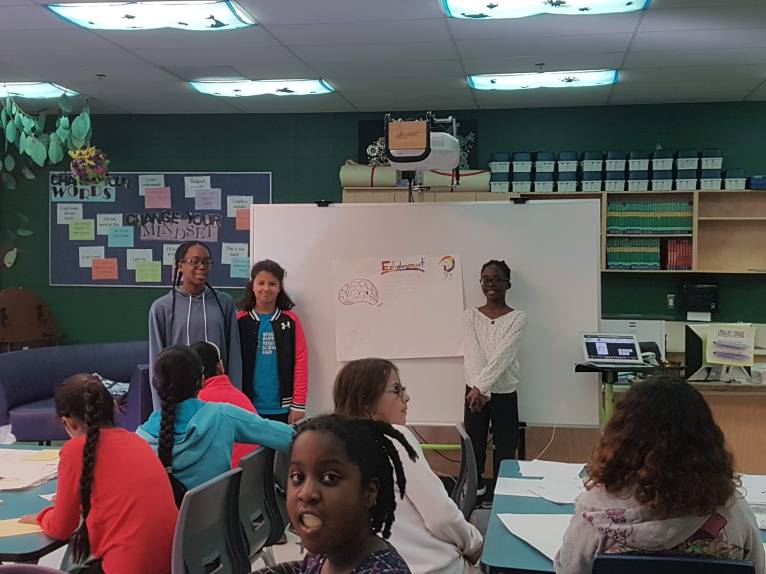 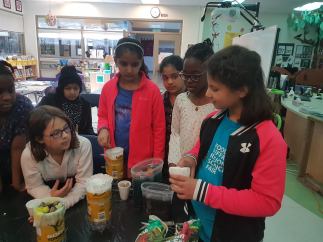 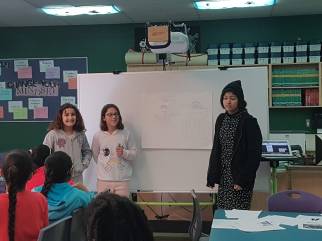 In week 3, the girls learned about electrical circuits and circuit diagrams, using resistors, wirees, LEDs and batteries. They were then tasked to create their own circuit powered games using LittleBits electronics. The girls incorporated fun buzzers and lights into their games. Finally the girls made mini solar powered robots and learned that we can power circuits with renewable energy! 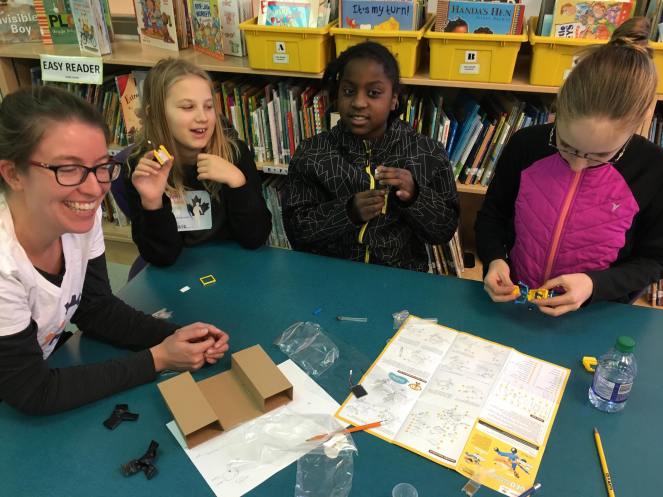 In week 4, the girls learned about kinetic and potential energy, forces and simple machines, and designed their own rollercoaster rube goldberg machines! Then they made some ‘potential energy cars’ powered by elastic energy. Finally, they learned about aeronautics and made some paper rockets and helicopters! 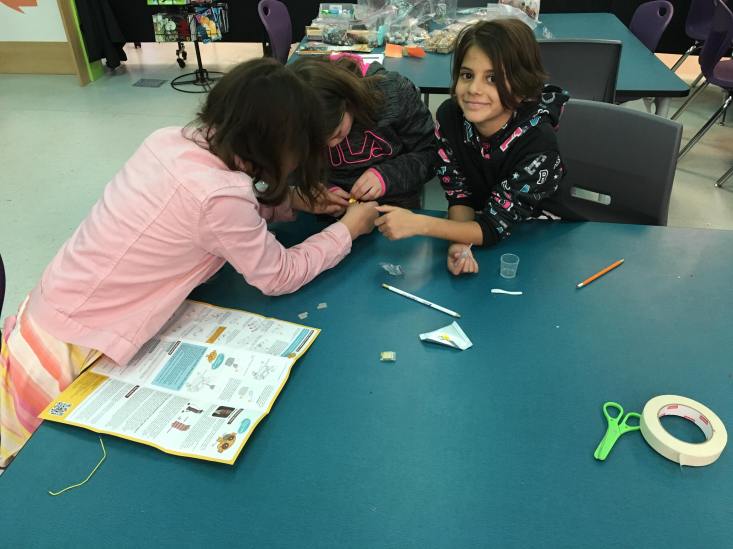 For Week 6, the girls went to the Oil Sands Discovery Centre. They did a scavenger hunt through the museum to learn about the oil sands extraction process. Then they went back to the lab to do a core sampling activity with ‘play-doh’ deposits. Then they were able to do an oil sand extraction activity and separate out the oil from the sand using hot water. Finally they learned about the storage and treatment of the by-product of the oil sands process, known as tailings. The girls designed and tested their own tailings dams!

In Week 7, the girls did some ‘halloween-themed’ activities in civil and industrial engineering. First they learned about the assembly line process and had to make candy bags using an assembly line. Then they learned about logistics and route-planning by trying to find the optimal trick-or-treat route to get the most candy! They had rules like ‘speed limits’ (no running) and one way streets. Finally the girls had to build structures to hold the most candy. The designs were so good we had to use more weight than candy! Great job girls! 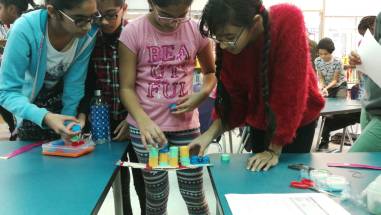 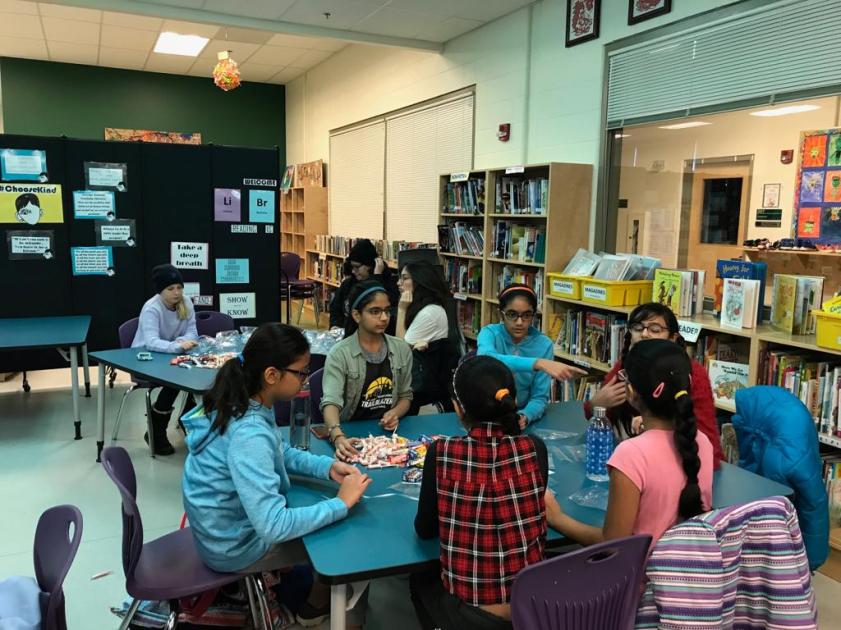 In Week 8, we had guests from Code Mobile come in to teach the girls how to code their own video game! The girls used Scratch programming and learned about concepts like ‘IF’ statements and variables. They were able to make a game where their character had to avoid falling objects while also trying to catch useful objects for points! So much fun!

Once again we had a blast at the SMART program and look forward to seeing another cohort of girls next year! See you then!